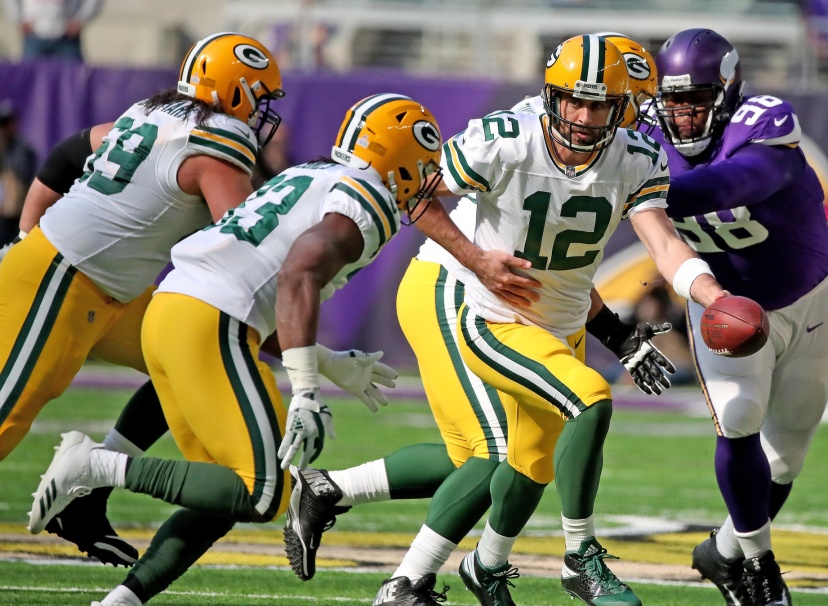 The Green Bay Packers (4-5-1) will look to keep their playoff hopes alive Sunday night as they take on the Minnesota Vikings (5-4-1) in a primetime tilt at U.S. Bank Stadium in Minneapolis.

Some notes on the matchup:

The Packers have ruled defensive tackle Mike Daniels (foot) out for Sunday’s game, while safety Raven Greene (ankle) is listed as doubtful. The team also placed linebacker Nick Perry (knee) on injured reserve, ending his season. Meanwhile, seven others are listed as questionable.

The keys for Green Bay on offense:

Score early & twist the knife: In last week’s loss at Seattle, the Packers started strong and wilted late—the continuation of a troubling pattern that has doomed them more than once this season. Entering a famously hostile environment for the second straight week, Green Bay will need to find ways to bring the crowd at U.S. Bank Stadium down a notch or two, and there is no better way to do that than by putting points on the board. If they can check that box, the next step to securing their first road win of 2018 will be putting the game out of reach if and when they have the opportunity. As we saw in the Seattle game, letting the home team hang around in these games generally doesn’t turn out well.

Run to pass: One area where the vaunted Vikings’ defense has been vulnerable is in the play-action passing game. Given the historically aggressive nature of Mike Zimmer’s defenses, it’s no surprise that teams have been able to take advantage of some over-pursuit by Minnesota at times this season. To make that possible, though, the Packers will need to carve out yards on the ground first. Obviously, that’s easier said than done against a Vikings defense that allows just a shade under 95 rushing yards per game, but it will be absolutely essential to opening things up for Aaron Rodgers in the passing game.

Quick game: Everyone is aware that Aaron Rodgers hasn’t been himself lately. Sure, his stats paint a pretty picture, but the missed throws and miscommunications are happening far too often. One way to remedy those problems might be to try and get the ball out of his hand quickly. I know, I know—Rodgers is his own worst enemy in this area, as his penchant for creating plays and holding the ball tends to get in the way. Against a monster Vikings defensive front, however, he won’t have all day to find the throw he wants. Luckily, despite opinions to the contrary, Rodgers and head coach Mike McCarthy are not stupid. They know what they’re up against, and I’d be extremely shocked if they don’t try to counter Minnesota’s elite pass rush with some quick, rhythm throws, especially early on.

The keys for Green Bay on defense:

Limit the shots: It doesn’t take a genius to see the Packers’ secondary is going to have their hands full Sunday night. Adam Thielen may be the hottest receiver in the league over the past year and a half, and Stefon Diggs has proven to be a thorn in Green Bay’s side almost every time they’ve met. It’s not realistic to think the Packers will shut those two down completely, so they will instead need to focus on limiting the duo’s impact in terms of big plays. It will be interesting to see how Green Bay chooses to deploy their pieces, but one might assume rookie Jaire Alexander could get to know Thielen very well by the end of the night.

Get to Cousins: Impossible as it may seem, the Packers enter Sunday tied for third in the league with 34 sacks. And while Minnesota only ranks near the middle of the pack in sacks allowed, their offensive line is a major weak spot on a unit otherwise laden with talent. It’s a matchup Green Bay should win, even with Mike Daniels sidelined with a foot injury. Vikings’ quarterback Kirk Cousins seems disinterested in stepping out of the pocket unless the play design calls for it, meaning the Packers can make life very difficult for him if they’re able to create penetration and either get home or make him throw from a messy pocket.

Take/Give: In their two home losses this season, Minnesota was a combined minus-four in turnover margin. In victories, Green Bay is plus-four. The two teams both enter the game plus-one in the category for the season. Simply put, whoever leaves the game plus-two or better will have put themselves back on the right track.

Sure, the Packers can probably absorb one more loss before they truly enter do-or-die territory, but for all intents and purposes, the playoffs start Sunday night in Minneapolis. For what it’s worth, these teams have combined for one victory over a good team so far in 2018—the Packers thrilling comeback win over Chicago in week one. Since then, Green Bay and Minnesota have shown flashes of brilliance followed by stretches of self-inflicted wounds and ineptitude. I’m not usually one to play the revenge card, as the NFL is such a fluid league, but I am one to believe that Aaron Rodgers will walk into U.S. Bank Stadium feeling like he has a point to prove. Call me crazy, but with his team’s back against the wall, in the place where they watched their 2017 season disintegrate in the blink of an eye, I think Aaron Rodgers is primed for a vintage performance. You want a galvanizing moment? This is it. Packers 31, Vikings 23.