Is 10 Really the Magic Number? With week 12 of the NFL season upon us, playoff prognostication is in full swing. From division winners to bubble teams, fans and experts alike will attempt to play out every possible scenario to see where their team will end up – or if they even have a chance. Throughout the course of history in the NFL, or at least in the 25 years I’ve been alive, the 10-win threshold has been considered the benchmark for a postseason berth. Win 10 games, give yourself an outstanding chance at playoff football.

At 4-6, the Green Bay Packers would need to win their final six contests to reach the all-important 10-win mark. While no one can say it’s an impossible task, it is certainly unlikely. Packer fans (the ones who haven’t written off the 2016 as a failure after week 11) are certainly wondering whether there are scenarios in which the Packers can fall short of 10 victories and still salvage a playoff berth, and whether that benchmark always holds true.

So, just how important is hitting the 10-win mark?

Using the past 10 seasons (2006-2015) as my sample, I took a look at the number of playoff berths by record. Twelve teams, six from each conference, make the playoffs each year, meaning there have been 120 playoff teams in that span.

The first thing I looked at was the number of teams who qualified for the postseason with less than 10 victories. Not surprisingly, nine victories was the most prevalent number resulting in playoff berths. In seven of the 10 years, at least one team with nine wins advanced the postseason, with a total of 13 nine-win teams qualifying in that period. Three times, 8-8 teams made it. Two seven-win teams, the 2010 Seahawks and 2014 Panthers, automatically qualified by virtue of division championships. That means 18 teams have made the playoffs with nine or fewer wins in the past ten years, or 15 percent of playoff qualifiers during that span. To break it down further: 10.8% of playoff teams in that period finished with nine wins, 2.5% had eight, and just 1.7% of playoff teams from 2006-2015 won seven games. 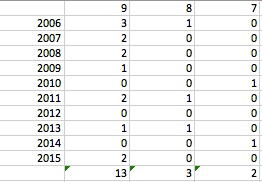 For those of you keeping track at home, this means the remaining 102 playoff spots, or 85 percent, over those 10 seasons went to teams with 10 or more victories. That is obviously an overwhelming majority and seems to back up the 10-win argument. For good measure, I looked at the number of 10-win teams over the past decade that didn’t make the playoffs. That number is seven. Only seven teams over the past 10 seasons have missed the postseason after winning at least 10 games.

Additionally, take a look at the average number of victories by playoff teams from 2006 to 2015:

The average number of wins by playoff teams during that span is 11. But couldn’t division winners with high win totals skew those numbers? Sure. So here’s a look at the average win totals of wild card teams from 2006 to 2015:

The average here comes out to 10.3 wins. So while all these numbers would tell us 10 is a relatively safe number, you actually may need more than that to guarantee yourself a spot in the NFL postseason.

What does this all mean for the Packers? Well, I suppose you could resort to the argument that every season is different when it comes to the win threshold to make the playoffs. Currently, Green Bay is benefitting from two divisions, the NFC West and NFC South. Out west, the Seahawks sit at 7-2-1 with the Cardinals behind them at 4-5-1. Barring a major turn of events, the Seahawks are the only team coming out of that division.

With first and last separated by just two games, it also seems unlikely that the South will get more than one team to the postseason. The trouble, however, comes from the East and North. Dallas currently sits atop the East with a 9-1 record ahead of New York (7-3) and Washington (6-3-1). Depending on how things shake out, it’s not out of the question to think the East could grab both NFC wild card spots when all is said and done.

The NFC North, though Packer fans may not think so, remains fairly murky. Detroit currently sits ahead of Minnesota, despite identical 6-4 records, by virtue of the head-to-head tiebreaker. One of those teams will improve to 7-4 and move into the driver’s seat after their Thanksgiving Day clash this Thursday. With a win Monday night in Philadelphia, the Packers would then move to within a game of either the Vikings or Lions, with 5 weeks to go. It’s also important to keep in mind that Green Bay has games against both Minnesota and Detroit left on the schedule, both of which will be either huge or meaningless depending on how the Packers fare prior to those matchups.

I would love to talk tiebreakers and best case scenarios in week 12 for Green Bay, but the fact of the matter is the Packers just have to win. Sure, every season is different and there are plenty of ways the season could play out. But as I’ve laid out here, one more loss almost surely crushes the already thin hope of a playoff berth for 2016.